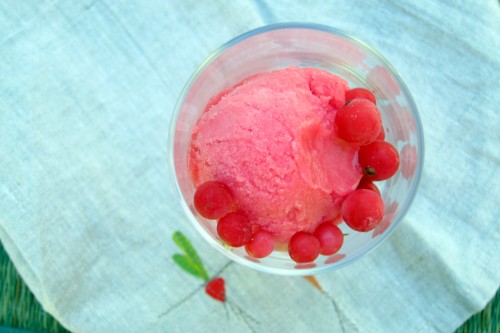 I have been posting far less often than I intended… it turns out I’ve been so busy doing fun things, and haven’t had any time to write about it!  I’ve been interviewing elder Alpine folk about their food traditions, selling my soaps at markets, gardening, foraging for mushrooms and wild berries, and I taught old time music in the Czech Republic with my dad for the two weeks. 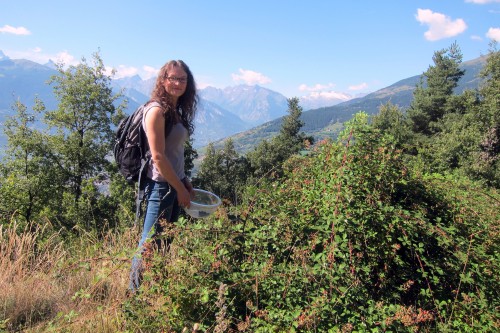 This morning we went foraging for wild blackberries

Our old time music students in the Czech Republic

At one of these markets, I had my stand next to my friend Elisa, who runs the local farm Genuinus.  The farm has been in her family for something like 4 generations, and they produce things like walnut oil, berries, vegetables, and honey.  If anyone ever passes through Valle d’Aosta, I highly recommend going to her agriturismo and having lunch there.  Anyhow, I got about a kg of freshly picked red currants from her, with the idea of turning it into gelato.  You see, my husband and I have been on a bit of a gelato kick lately.  We found a little gelato machine at Lidl, the local discount grocery store, and even though it is a wee thing it works pretty well.  As you can imagine, we’ve been indulging ourselves!  However, as much fun as it is to make creamy gelato using egg yolks, milk and cream, sorbetto is also delicious and is a great way to showcase good fruit.  Most gelato shops in Italy actually sell sorbetto instead of true gelato for their fruity flavors.  What is the difference between these frozen desserts, you may ask?  To start, gelato and ice cream are not the same; gelato has less air whipped into it, less butterfat, and should be served at a slightly higher temperature than ice cream.  Sorbetto is generally vegan; not containing dairy or eggs, it is just fruit, sugar, and a bit of water, processed the same way as gelato.  Sorbetto can be surprisingly smooth and creamy, as long as you let it run long enough in your gelato machine. 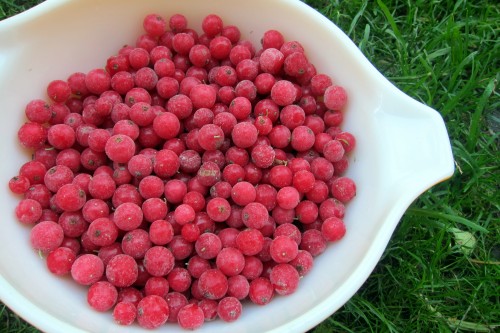 I came up with this recipe with the idea of rounding out the simple flavor palate of red currants with the zesty acidy of lime and the rich flavor of Chambord liquor.  Chambord is a French black raspberry liquor, and a great thing to keep on hand when making desserts or dishes with berries. 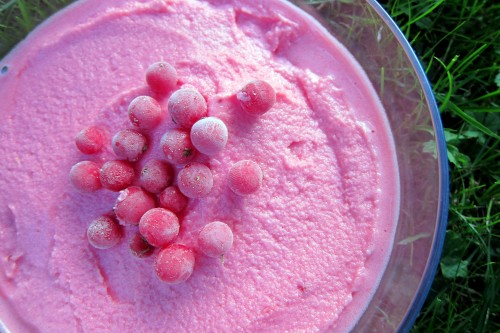 A  trick to de-stem red currants:  if you freeze them first, it is very easy to remove the stems.  Just roll the frozen berries around in your hands and the stems fall off. 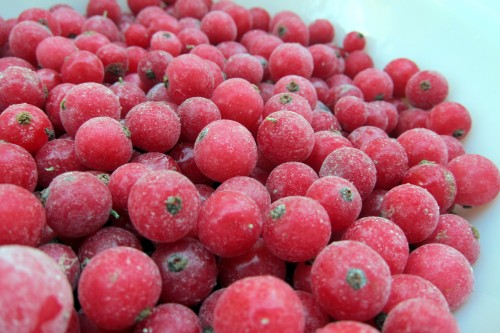 In a medium saucepan, combine red currants with a splash of water.  Heat gently until the currants start to pop and release their juices, and then pass through a food mill to separate out the seeds.  Combine 3/4 c water with the sugar, and  heat while stirring constantly until the sugar is dissolved. Add red currant juice and lime juice to the sugar syrup, stir well and let cool completely.  I put it in a water bath, and then refrigerate.  When cool, add 2 T Chambord, and process according to the directions of your ice cream/gelato machine.   Best served freshly churned! 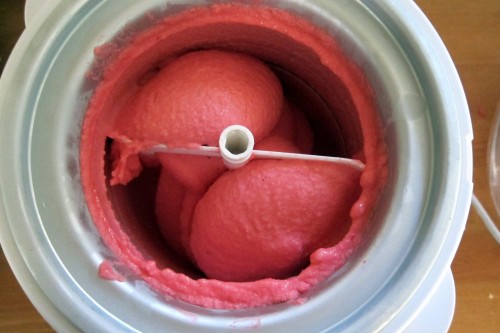 If you don’t have one of these handy machines, here is how I made it before I got one:  put the mixture in the freezer, stirring every now and then, until it turns into a nearly completely frozen slush.  Mix it for a minute or two in a food processor, and stick back in the freezer.  When it is almost completely frozen, break into chunks and process again in the food processor until smooth.  Voila, you have make-do gelato! 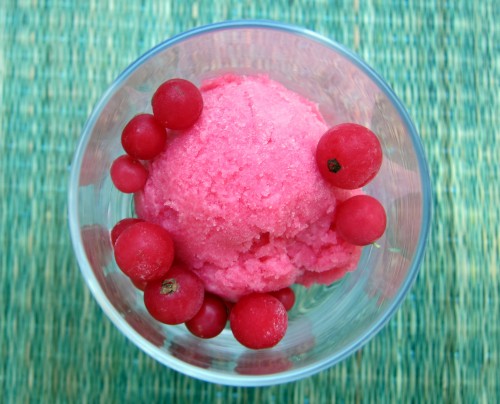