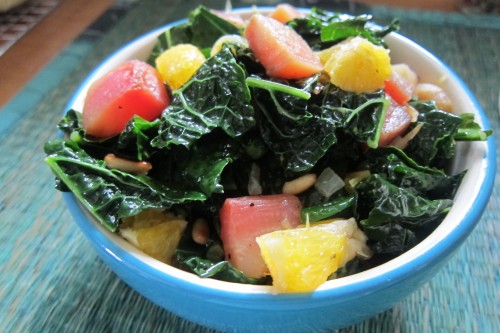 I always thought I hated beets, until I got a craving for them last winter.  In Valle d’Aosta, Italy, you cannot buy fresh beets. They just don’t exist here. You can get a vacuum packed steamed beet from the grocery store, but that just doesn’t appeal to me.   So I planted a few kinds of colorful beets in my garden this spring, and now, 6 months later, I finally get to eat beets.  This year has been an almost complete disaster in terms of gardening; we had icy cold rain through June, and it just never got hot enough for much of anything to thrive.  The upside is that beets, kale, garlic, and onions don’t suffer much from cool weather, so I have been eating these veggies in abundance.  And today I’ll show you a recipe that uses all of them. 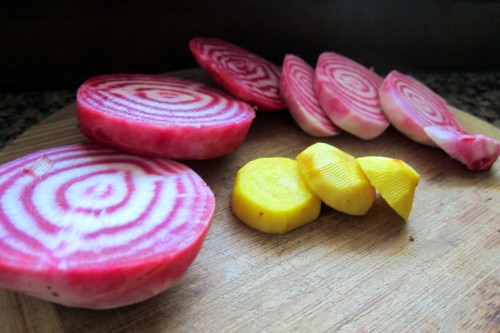 As for the lifeguard olive oil…. last night one of my husband’s colleagues invited us over for dinner, and gave us a bottle of olive oil that his ‘baywatch’ friend in Puglia made.  I wasn’t sure if I heard correctly, so I asked, ” Baywatch…. as in the TV show featuring women with bouncing boobs?”.   My darling husband responded, ”Yes, that one! That’s what he does!”.  I eventually gathered that this olive oil making friend was not actually on the show Baywatch, but is a lifeguard.  Yes, ladies and gentlemen, I have my hands on honest-to-god lifeguard olive oil.  Olive oil created by a man who is paid to be half naked on a Mediterranean beach.  I don’t know who he is or what he looks like, but I like imagining him to be a hunky Italian stallion, harvesting and pressing the olives in his speed-o ……..

Anyways, ahem, recipe time.  Delicious enough on its own, it is probably even more tantalizing if you can manage to acquire lifeguard olive oil.  Or you can just come over for dinner and share mine. 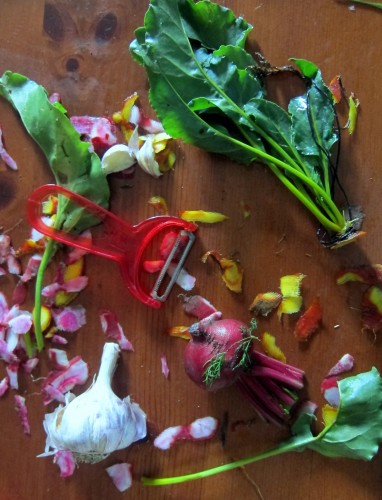 The usual drill: I don’t measure when I cook things like this.  Just take some of each vegetable and you’ll be fine, really.  The quantities below are more-or-less made up and may or may not reflect what I actually do, since I never make anything the same way twice. Also, do not, I repeat DO NOT eat a slice of unpeeled, uncooked beet.  I tried it, and my throat burned for three days. I don’t think all beets do this, but some do.  When you peel and cook them they won’t burn you.

a spoonful or two of pine nuts

Peel your beets and chop them into chunks.  Toss with a drizzle of olive oil, and sprinkle with a little salt and pepper. I like to use fleur de sel or other flaked sea salt.  Wrap in aluminum foil and roast in the oven at 400 degrees for about an hour, or until tender.  In the meantime, toast the pine nuts until fragrant but not burnt. 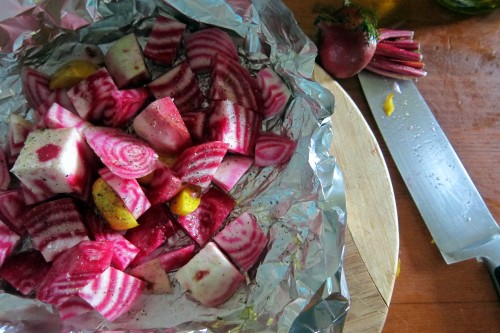 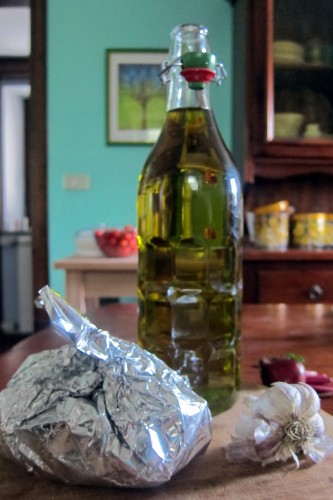 After the beets are roasted, thinly slice your onion, mince your garlic, and roughly chop the kale.  Cook the onion in a little bit of olive oil until soft, add garlic, and cook for a minute or two until garlic is fragrant but not browned.  Throw in kale along with a few spoonfuls of water, and cover the pan until the garlic barely starts to wilt.  Put your kale/garlic/onion mix in a bowl,and add chopped oranges, roasted beets, and pine nuts.  Toss with a drizzle of nice olive oil (cold pressed by a handsome lifeguard if possible), and season with salt and pepper.  Good eaten hot or cold! 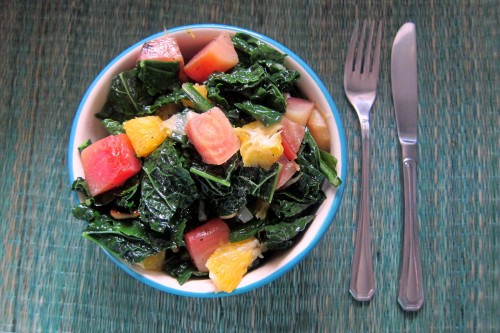 Lessons from a Neighbor: Fried Zucchini Blossoms (Fiori di Zucca)
How I got where I am today and Lemon Cake Pie
Yes, your polenta should be be that thick!

← Red currant, lime and chambord gelato
I am officially an Italian lady →