Last weekend I was selling my soaps and other body care products at a lovely market in Bard, which is an ancient village at the foot of an enormous fort.  The very fort that Carlo Tassi (of the wonderfully weird scrap metal museum) claims his mother was born in.  It is a magical village where the streets are so narrow one car can’t hardly fit, and it is a two way road. Like I said, magic. 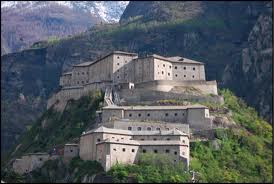 While it was a beautiful day, and I had a exquisite alpine view from my stand, there were hardly any tourists there and all the vendors (myself included) either lost money or barely broke even.  To pass the time, I wandered around a bit to see what other people were selling.  I was looking for a nice piece of cheese to eat for lunch when I found something that made me regret not having my camera on me. 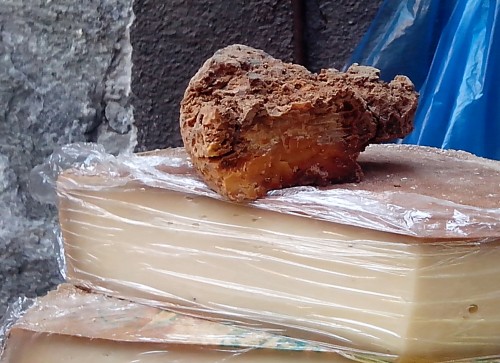 It is that weird brown thing on top of the Fontina.  I photographed it with my not-very-nice cell phone camera, but you probably get the idea.  It is brown and crusty and hard and crumbly and filled with worm holes.  I was fascinated by it.  The cheese maker saw my fascination and when I asked what kind of cheese it was he simply stated ‘formaggio della guerra,’ which translates to war cheese.   Given how crusty it was, I automatically assumed that it was World War II cheese. Maybe even World War I, one can never be too sure.  The cheese maker insisted that I try some, and I politely declined. He insisted some more, and I insisted that it would be too strong.  He shaved off some crumbs, and gave them to me anyways.

Tentitively, I licked at one of the crusty brown ancient cheese shavings, expecting something really repugnant.  But what do you know, it was delicious!  Extraordinarily strong, but in a spicy, earthy, not overtly stinky way.   I then asked the guy exactly how old the cheese is and he said ‘oh just a few years’. There goes my badge of honor for eating 100 year old war cheese…. but it was an experience nonetheless!

← Italians and their relationship with food
Yes, your polenta should be be that thick! →