A few days ago I took my mom and her friend Randy up to the village of Ozein.  It’s a paradise…there is no other word for it!  Well, a paradise for people who love ancient picturesque villages immersed in a sea of wildflowers, with breathtaking views of the tallest mountains of Europe.  It’s pretty spectacular.  As my momma says, better than a poke in the face. 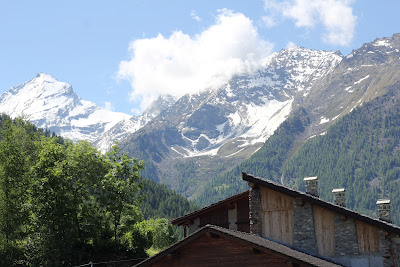 We decided to try and find the village’s community bread oven, because Ozein is pretty well known for their wood fired pane nero festivals. Pane nero, or black bread, is the traditional bread of Valle d’Aosta.  Twice a year (sometimes more often) the villages fire up their massive community bread ovens, and the locals come and bake their bread that will last them the year.  The bread is low and dense, and made with either rye or whole wheat flour.  Some people make it with a starter, others with yeast.  They dry out the bread on racks, and have a special cutter for it so that they can saw off hunks that they then soak in liquid so that it is edible.  For dinner, it can be soaked in broth and made into soup, or for a snack it is soaked in homemade red wine, called zuppa di asino (donkey soup). 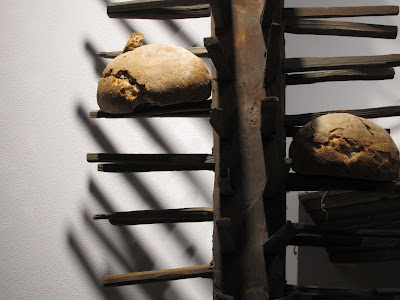 The only bread oven we were able to find is one in ruins near a rustico (half falling down old stone house) that I have been eying for years. Gorgeous, but obviously not been used for many years.  After climbing a hill through the village through a blossoming sea of wildflowers, we saw an old woman on the street, chatting with an old man.  The man left as we approached, and I asked the woman if she could tell us where to bread oven is.  Our conversation went something like this:

me: “Could you tell me where the bread oven is?  My mom is writing a book on them, and we heard the one of your village is wonderful.”
old woman: “It’s just down the hill over there.  But it’s locked shut!  I wish I had the key, I used to have it, because it’s beautiful inside.  I’m so very sorry that I don’t have it.  I would love to take you there.”
me: “oh, that’s ok, we appreciate it.  We’ll look at it from the outside.”
old woman: “We baked bread in it just last Saturday!  I wish you could have come, you would have loved it.”
me: “ You bake bread, how wonderful!  What kind do you make?”
old woman: “pane nero, with whole wheat.  I’m so sad that I can’t take you to see the oven. Would you like to try some bread?”
momma: “Sure!”

….old woman goes into her house, and comes out with a loaf of bread, which she hands over to us.  She seemed so heartbroken that we weren’t there for the firing of the bread oven, she wanted to give us a loaf of her bread that she made last December.  Yes, you heard right.  Last December, either on the 14thor 15th, she doesn’t remember which day.  She said it would be good for another few years, so we don’t need to use it right away. 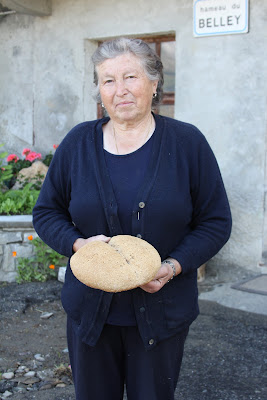 She insisted we take the whole thing (not like it could be easily split, anyways), wrapped it in newspaper, and we went on our way to explore the old village.  When we got come, I called up my friend Angelo, whose mother is famous in the Valley for her zuppa valpellinese, a traditional Valdostano recipe using black bread.  He gave me the recipe, which resulted in a glorious dinner.  If you can scrounge up some dried up whole grain bread, here is an excellent use for it!  Measurements aren’t really important.  Folks here don’t measure for this soup, so neither should you. This isn’t a soup with much liquid in it, and is baked in the oven with Fontina cheese on top. 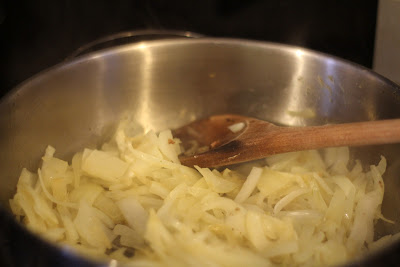 Preheat your oven to 350 F or so.  Prepare your broth, salting it to taste if necessary, and slice the Fontina.  Slice the bread (or in the case of black bread, get it into manageable sized chunks), and toast it with a good amount of butter.  Take off the leaves from the cabbage, and leave them in pieces as large as your hand.  Blanch the cabbage leaves (put them in boiling water for a minute, and then dunk them in cold water). 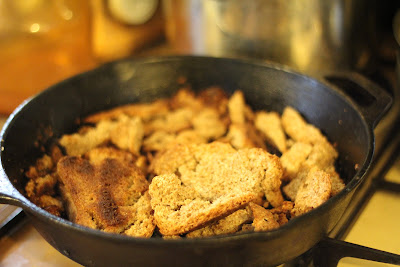 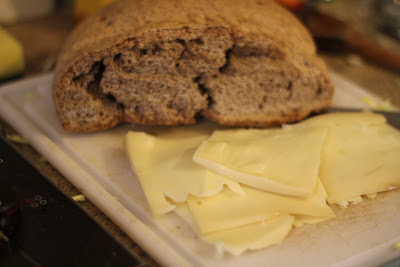 In individual portion sized, oven safe casserole-type dishes, layer the ingredients.  First bread, then caramelized onions, then blanched cabbage, and then Fontina.  If your dish is deep enough, layer until it is filled, always finishing with Fontina.  Pour the broth over your layers, making holes in the cabbage and cheese if the liquid can’t pass through.  Put dishes in the oven for about 45 minutes, and if the cheese isn’t well browned by then, put the broiler on briefly. Serve hot! 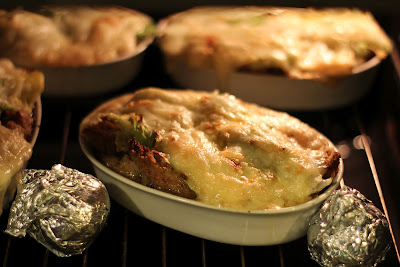 ← Light as a Cloud Gnocchi
Jam Making for Jamaphobes →