Appalachia in the Alps

‘Baby girl, don’t worry, we are going home,’ I whispered to Genepy, the bunny.

You see, I was driving the car on the second most curvy road in the mountainous region where I live, Valle d’Aosta. Which means that it is so curvy that when you come around the bend you just about run into yourself coming the other way! Genepy was in her new pet carrier, that I wrote about in the previous post, and she is a giant bunny so she pretty much filled up the whole thing. And she wasn’t too happy to be in the car, in a slippery plastic carrier, on a curvy road. But, she was going to the village where she was born, in Valgrisenche, which is in a very narrow valley which ends in a giant dam. The story of how Genepy the bunny was adopted from the ‘Guardian of the Dam’ (no kidding!) in the middle of a snowy November night, to save her from the fate of her siblings which surely ended in many stomachs, will be told another time. 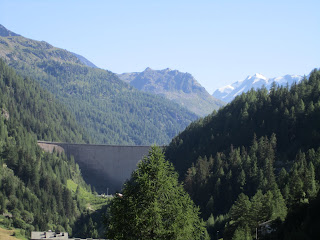 I was going up there, and toting the rabbit with me, because I was staying up there for the weekend, at the en of a three week traditional music camp called ‘strada blu’ (blue road) held by the local CenTrad organization (they teach people traditional music from around the world), which this year was all about TRADITIONAL AMERICAN MUSIC! Which of course meant that my very talented father, Wayne Erbsen, was teaching the final week, for the advanced students. He is a ‘jack of all trades, master of all’ kind of guy when it comes to American history, folklore, and traditional music, and he’s been teaching, literally, for 50 years, so he was the perfect guy for the job. Somehow I ended up teaching dance workshops, for two weeks up there. Taught them flatfooting and even some contra dancing! I had never called before these weeks (I’m a contra dance musician and dancer…not a caller), but I did pretty well considering it was my first try. 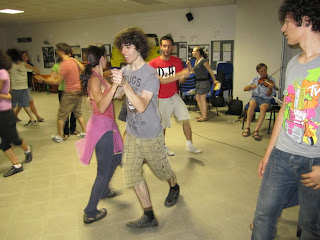 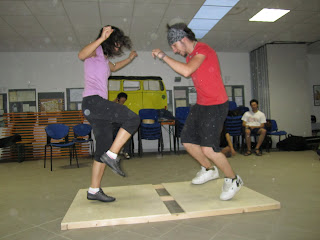 Anyhow, I had obviously been up there a number of times over the three week camp to hang out, teach dance classes, play music, and visit with my dad, but hadn’t yet spent the night, which just about everyone else both working and taking classes there does. It’s at an ancient fort that was converted into a WWII military base, and is now a restaurant, bar, B&B, and community center. It is in an incredibly gorgeous place. So, I made it up there with the bunny and as soon as I parked the car, I heard the unmistakable sound of my dad playing music, which is as recognizable to me as his voice- if not more so. I jumped out of the car with my fiddle and Genepy, and ran over to where he was playing with a group of students. I whipped out my fiddle and joined in. The bunny made a ruckus, so I took her out and she sat on my lap while I played. It was a little bit more difficult when I played the banjo, but as she is a spoiled brat who loves old time music she gets what she wants! 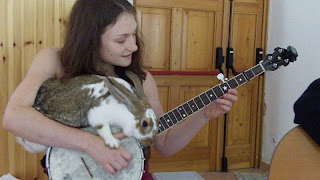 It was awesome. The group split up into six bands or so, and they were all practicing for something that evening, which turned out to be incredible, and I don’t think I could possibly put it into words. We were hoarded into a bus with our instruments, and taken to a village where each of the bands (I was in one with my dad and some other great musicians, including an incredible singer) were given a place to play in the town, along the pedestrian walkway. I assume it is pedestrian, anyhow, because the streets are too narrow to imagine any kind of car driving down them. My group was placed on top of a who-knows-how-old arch over the walkway that led into a really cool barn that would be a potentially great place to have a dance. 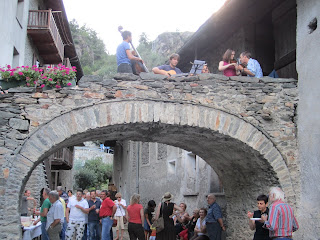 It turned out that we were the last on the ‘tour’; all the townspeople basically went from one band the the other, down the street, ’til they got to us. There was local wine flowing freely, as well as nachos and salsa, because that is obviously American to them. And straw cowboy hats. We played and played and eventually ended up under the arch, playing and dancing at the same time. After a bit, once it started to get dark, we were herded once more up the hill with our instruments, where there was a big cookout (no attempt at American food here… this was pure Valdostano fare), a big bonfire in the middle of the street, and perhaps the biggest music jam I’ve ever been a part of. About 30 of us were playing American old time music, by the bonfire, with Alpine townsfolk milling around and dancing, and it was beyond words. I was there in that moment, playing my guts out on music from my homeland, belly full of good food and wine, sweating from the fire, surrounded by family and friends and I thought, ‘THIS is as cool as it gets’.

And it just kept getting better. Those of you who have seen me play music, especially for a contra dance, know that sometimes I get a little wild and shake my head and jump up and down and wiggle my hips and basically throw myself around like a crazy woman when I get really into the music while playing my fiddle. I’ve seen videos of me doing that, and it can get pretty crazy, but I took it to a whole new level this night, and the Italians, who are not inhibited at all, decided that it would be a good idea to dance around like crazy people as well while they played their fiddles, mandolins, guitars, harps, drums, clarinets, flutes, and accordions. So, if you can imagine, it was the middle a summer night in a small Italian village in the Alps, thirty musicians are playing American music with all their mite, jumping around, hootin’ and hollerin’, sweating from the exertion and from the fire, with village folks getting into it too. I think my dad took a video and I’ll have to post it at some point.

Lets just say it was a hellofa time.

The Prosecco Ladies
How I got where I am today and Lemon Cake Pie
Visit Aosta! Rustic Food and WineTour in October 2011