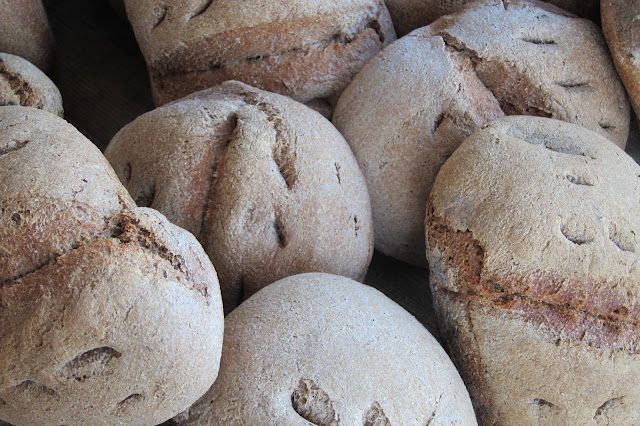 I can’t believe I haven’t written about this yet.  It was just such an incredible experience that I had to let it marinate for a while so that the words came out right…. but then I forgot about writing it.  So here we are, six months later.

Black bread, called ‘pane nero’ in Italian, and ‘pan ner’ in Patois, the regional dialect, is an important staple in Valle d’Aosta.  It’s a dense bread made with a mother dough and uses whole wheat and rye flours, and a fairly low hydration.  It’s baked in a wood fired oven, and left to dry out on racks so that it can be eaten for months (or years) to come.  If eaten fresh, it is often eaten topped with lardo (cured and spiced pig fat, sliced paper thin) and honey.  Once it has dried out, it is used in soups such as seuppa valpellenentze, or dropped soaked in strong red wine to become a local favorite, zuppa dell’asino (donkey soup).

Most villages, small or large, have a community bread oven, and they are generally fired up during two periods of the year: winter and summer.  In my village of Charvensod, during most of November local families can sign up to use the oven at certain times, and small groups get together to put hundreds of loaves into the oven each day so that people have enough black bread to last the year.  There are also festivals celebrating black bread, and they generally happen in December/January and July/August.  My sister Rita was visiting in August of this year, and I dragged her (willingly) to one of these festivals, to the “Fiha di pan ner” in the village of Introd, which is in the famous Gran Paradiso Park.

These local festivals are simply fabulous.  They usually involve a lot of local red wine, copious amounts of food fired in the wood oven, farmers wearing pajamas and mullets, and a lone accordion player playing cheesy music.  I simply love them!

It turns out that we got there about 10 hours early for the party….but just in time to help with making the bread.  We found the community bread oven in a little strip mall, right by the village’s ATM machine.  We peeked around shyly, looking at the oven and sneaking looks inside the room where older members of the community were kneading bread, when a man invited us inside and insisted we share a big cup of wine with him (it was 10 am!), along with generous slices of bread fresh out of the oven and local Fontina cheese.  They had just finished one batch of bread in the oven, and the next batch was going through its first rise.  The wine-welding man, Pietro, was making seuppa valpellenentze, a black bread, cabbage, and Fontina soup that is baked in the wood fired oven, and proceeded to tell some off color jokes involving his sausages.

I don’t quite know how it happened, but suddenly we were wearing aprons and kneading bread around a large table with some hilarious older ladies, Olimpia, Irene, and Agata.  There were two men there, and the one who kept making hilariously lewd comments would cut off pieces of the dough that had gone through it’s first raising, and would throw it at one of the women, who would deftly knead it and shape it into a loaf, which was then thrown in a pile of dough on a sheet of fabric.  The pile was rolled into a long snake, and then chunks were again cut off, shaped, and placed on a long board.  Olimpia, who must be at least 90 years old, quickly scored the loaves with a floral pattern, and the men shoveled the shaped loaves into the roaring hot oven that fits 110 loaves at a time. 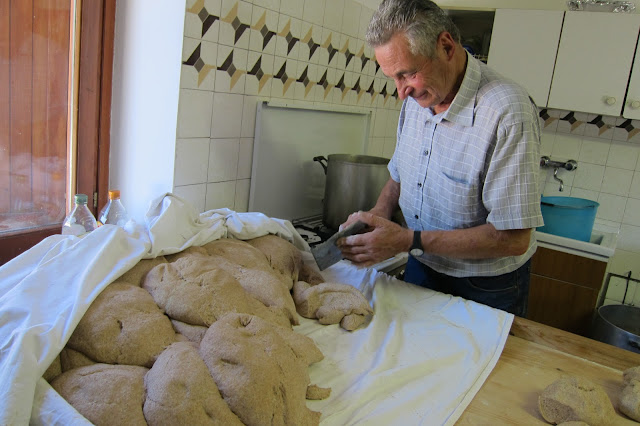 They chatted in the Patois dialect, which I don’t’ understand much of, and occasionally switched into Italian.  Being that they were all from older generations, they didn’t speak a word of English, so Rita was out of luck.  So what they did was make funny faces at her, which was pretty hilarious.

We helped all day until we got all 110 loaves of bread that we helped make into the massive community oven.  We couldn’t stay for the party that night because we actually had to help friends bake bread in their smaller wood fired oven at their house.

Here are some video clips I took while a group of kids were there helping out: