Battle of the Queens 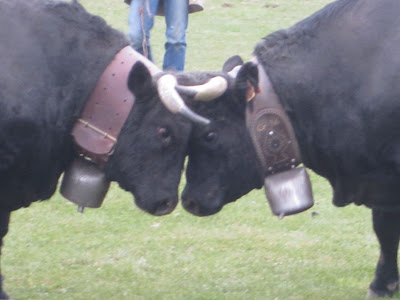 It seems that most things in this lovely valley I live in revolve around cows.  The beloved Fontina that is eaten at every meal, the cows standing the the middle of the road blocking the traffic on the way to work, regional competitions for leather workers who make very fine cow bell collars, metal workers who make special cow bells, a giant festival for when the cows come back down from the mountain at the end of the summer…. And the battle of the queens  (Bataille des Reines).

Who are the queens, these strong females battling it out to become the queen of the entire region of Valle d’Aosta?  They are cows. It is one of the biggest events of the year, held annually on the 4th weekend of October and countless people gather with ample food and wine to watch the top cows of the region literally battle it out in the annual finale.  There are about a dozen preliminary rounds in the preceding months to establish which cows get to be in the big battle, before all of the eyes in the valley.

At first, I was very perplexed by this, and didn’t like the idea much.  I’ve been a vegetarian for nearly 20 years, and am firmly against the mistreatment of animals in any manner.  I thought  it sounded cruel, until I realized (by watching the cows in the pasture around my house) that this is just what female cows do on their own every day in every field, everywhere, to establish the pecking order.  They don’t hurt each other, but just butt heads and lock horns until one gets bored and runs away.  The remaining cow wins, and when she has battled it out with all the cows in her field, and they all wandered away before her, she becomes the top queen of the field.  This spectacle is essentially establishing a pecking order for the entire region, and everyone wants to watch.  It is actually quite lucrative to have the winning cow; that cow instantly is worth a fortune, as is all of their offspring.   I am proud to say that the neighboring dairy (the one across the field that I get my cheese making milk from) has THE queen cow from both this year and last year.  So, my cheese is made from the milk of a queen!  Queen Cobra. I would personally be a little wary of milking her.

This video is pretty adorable and is a good explanation of the Bataille des Reines.

The whole event is really peculiar.  At the gates there are young women dressed in traditional Alpine clothing.  They sell decorated cow bells, local cheese, cheap beer, and cotton candy.  The thousand or so people have all brought copious amounts of food and drink, spread out in the hundreds of picnic tables overlooking the arena.  It is all pretty much traditional food.  Big rounds of darkened cheese, hunks of dark and dry bread, barrels and unmarked bottles of homemade wine, piles of aged sausages, and even a big old half eaten hairy leg of what I presume to be a goat or pig… feet, fur, and all.  People are wrapped in blankets, holding a knife in one hand, a giant hunk of cheese in the other, with a bottle of wine beside them.  The leap up and cheer when their favorite cow wins, and look downtrodden with their cow runs or wanders away.  There are at least 5 different TV news stations covering the event.  Below the picnic area, there is the barn, where hundreds of beautiful brown cows are being lovingly coddled by their owners, or teenagers are sitting on their feed bins sneaking drinks of wine, and texting friends.   Some of the cows even have corporate sponsors, with the name of  the companies name engraved onto the cows’ decorative face plates.  Another strange aspect: the cows absolutely must be pregnant.  The explanation I have heard is that pregnant  cows are much less likely to get into a violent fight.

The arena is quite big, and it is made especially for this event.  The venue is called ‘vaccodromo’, which literally translates as ‘cow dome’.  Also, Bob Dylan got to play second fiddle there, so to speak, when he performed there some years back.  My husband, having been to both the cow battles and the Bob Dylan concert, says that more people were at the last cow battle than at the concert.  These people have their priorities straight!

There are six cow battles going on at a time.  They put two cows near each other, with their owners nearby, and usually the cows stand around, chewing their cud, pooping, and occasionally pawing the ground.  At some point, after a few minutes or maybe even a half hour, one of the cows head butts the other, and they clash horns a bit.  One of them eventually gets tired of it, and scampers off.  Sometimes the winning cow goes running after it, and then the various owners and random observers, start chasing the cows around to prevent them from trampling people, which sometimes can take a good bit of time.  I often saw the owner of the losing cow kiss his beloved cow on the head, and give it friendly pats.  These men really love their cows.

My mom was visiting at the time, and went with me.  She turned to me and said, ‘Annie, you live in a really strange place’.  It’s true, I do.  People gnaw on furry, hooved, goat legs while watching pregnant cows butt heads, in an isolated valley in the Alps.  I just love it!