How I got where I am today and Lemon Cake Pie

By Annie on February 3, 2010 in life, recipes
It’s hard to know where exactly to start. I’m new to this whole ‘blog’ world (I’m behind the times, I know), but I’ve been told my life is interesting and that I should do this.My life is a little bit mismatched, but in a delightful manner. For example, right now I am sitting in my house-that-who-knows-how-the-heck-old-it-is perched on the dark side of Valle d’Aosta in northwest Italy, with views of snow and glacier capped alps from every window, but I’m eating the last slice of a delicious ‘lemon cake pie’ that I made last night. It’s a historic American recipe, and I made it in an American vintage yellow pyrex pie plate. Yes, I toted my pyrex all the way over to Italy.

This blog is going to be about my experiences as a young Appalachian woman living in Italy, the people I meet, the funny cultural things, the traditional music and dancing, and quite possibly most of all, the FOOD. I love food. I love pretty much every aspect of it- growing, harvesting, preparing, cooking, serving, eating, smelling, you name it. I want to learn as much as I can about the regional food, but I don’t want to lose touch with my roots. So, not only is this blog about my adjustment to Italy, but perhaps a bit of Italy’s adjustment to me.

In case you are thoroughly confused, here is the brief ‘low down’ on what the heck I am talking about here, and who I am. I’m a medical physicist in my mid 20’s and am originally from the beautiful Appalachian mountains of Western North Carolina (Asheville, to be specific). I’m a lifelong musician, with fiddle being my main instrument. I grew up quite literally steeped in traditional Appalachian music and culture, with my parents being historians of the regional food, music, and folklore for a living. So, I’ve been playing old time music since I was a tot, and my version of a teenage rebellion was learning to play Irish and contra dance music instead of old time! I love to cook and bake, and am fairly obsessed with pie making. I’m a swing dancer, and have been for going on 9 years now, and mostly do lindy hop. If you don’t know what that is, I highly recommend you check it out. I’ve danced and taught this dance in many places around the world, and it is another big ol’ passion for me. I’m also a contra dancer, and have been in a few (in my opinion) kickass contra dance bands. I love traveling. I’m accident prone. I love my family. I love art and occasionally dabble in it.

So, after college (where I had a mostly fabulous time and earned myself a B.S. in Physics), and before graduate school (where I got an M.S. in Medical Physics) I decided I needed a break from the world of physics and the US of A, and took off to Europe for more than a year. I had a number of adventures around the continent, mostly involving swing dancing, before I landed in Galway, Ireland. I had a work visa and spent about 8 months living there. I was the ‘everything’ at a cafe/bakery in the back of a flowershop (cooked, baked, cleaned, served, etc), played music on the streets and pubs, taught swing dancing classes, and drank just the perfect number of pints. When my visa expired, I still had about 4 months left in Europe before an airplane would bring me back to the US, and I didn’t quite know what I would do. Suffice it to say that I had an adventure in France with some of my Irish friends that had the end result in me walking nearly 600 miles across France and Spain, meeting the love of my life, and moving to the Italian Alps.

During that French adventure, I found out about the Camino de Santiago. It’s one of those rare events in life that COMPLETELY changes your life- everything from your perspective on humanity, your spirituality (or lack thereof), your muscle tone, direction in life, etc. It’s a 1000+ year old spiritual pilgrimage across southwest France and northern Spain, and you walk the whole way, carrying all of your belongings on your back. All day you walk, rain or shine (and it rained….), and then at night you stay at what is basically a rough hostel. It’s one of those experiences you just can’t put into a few words, but it changes you. I basically did this walk on a whim; I’m a lifelong agnostic with Jewish roots, and didn’t really know why I was doing it except that I simply felt that I must. So, exactly 2 weeks into my walk (out of a total of 5 weeks), I met the man who would 3 years later become my husband. Gianluca, an Italian engineer, and a person with an exceedingly beautiful soul. We walked the last 400 or so miles together, until we reached the Atlantic ocean on the western coast of Spain, and then instead of going off to work on a French farm like I had planned, I spent most of the rest of the summer in Italy with him. Somehow we made the following two years work, when I was back in the US getting my masters degree, and I said that I’d move to his hometown of Aosta if there was a medical physics job for me there. And somehow, there was!

So this fall I moved to the tiny village of Charvensod, a 20 minute walk from the city center of Aosta, which is Valle d’Aosta, Italy. It’s right on the Swiss and French borders, and it is an amazing place. I can see a glacier from my kitchen window, and I can see Switzerland from my bedroom. I’ve discovered that Italian bureaucracy is the world’s most complicated labyrinth, and takes a lot of patience. So, now you know more-or-less how I got here. For now, I’ll leave you with the recipe for the lemon-cake-pie I made last night because it is really good and you should make it, too. It can make any man fall in love with you, I promise! Oy yoy yoy, it is good. Seriously. It is from my mom’s book, ‘The Lost Art of Pie Making, Made Easy’, which you can buy here. 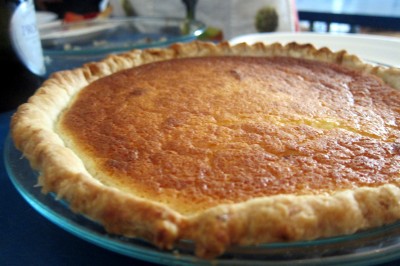 You’ll also need an unbaked pie crust. Please don’t use one of those fake store-bought ones, because that is cheating. On a later post at some point I will tell you how to make the best crust ever, if you so need.

Beat sugar, egg yolks, and butter. Add lemon juice, rind, and flour and mix together. Add milk, then fold in the egg whites, stiffly beaten. Pour in an unbaked crust and bake on the lowest shelf at 400 degrees for 10 minutes, and then turn oven down to 300 degrees for approximately 30 minutes more, until firm.

*This pie likes to burn. So, once it starts to brown, ‘tent’ a piece of aluminum foil over it so that it stops browning, and it is ready to come out when you move it back and forth a little and it doesn’t jiggle like liquid or jello anymore. Let it cool down before you eat it and prepare to go to heaven :).